This is a low-poly modular collection of models that can be assembled to create medieval villages.  They are fully compatible with the Modular Terrain Pack "shown in almost every screenshot."

The total model count is currently at 155, but this package isn't complete.  Leave comments with your opinions and/or requests.  Also, please post screenshots of what you've created!  If I'm impressed, they will show up on the right with your name watermarked.

Use MAST in Unity for free to assemble this model kit.  Copy the models into a new folder in Unity, open the MAST tools menu and click "Create Prefabs from Models".  Then load the Prefabs into MAST's palette:  https://fertile-soil-productions.itch.io/mast

Note:  Using AssetForge, these can be turned into 2D sprites easily, isometric and otherwise.

is there any app in which I can color the objects and exporting only the texture in any image format? The game engine on which im working on doesnt support colors within the files

Ummm.  Gotcha.  I've heard that before.  Does it trigger an error or just strip out the color and make everything white?

no error, it just imports the object complety in grey (the default color of imported meshes) with the  texture parameter empty

Then you can use Assetforge to add textures, export the results, then use them in your game

does assetforge allow to export the texture in png?

I think so.  If not, export as obj, convert the texture to png and edit the mtl file to change the image file extension it's looking for.

Hey!! they look awesome can you use them for commercial use? 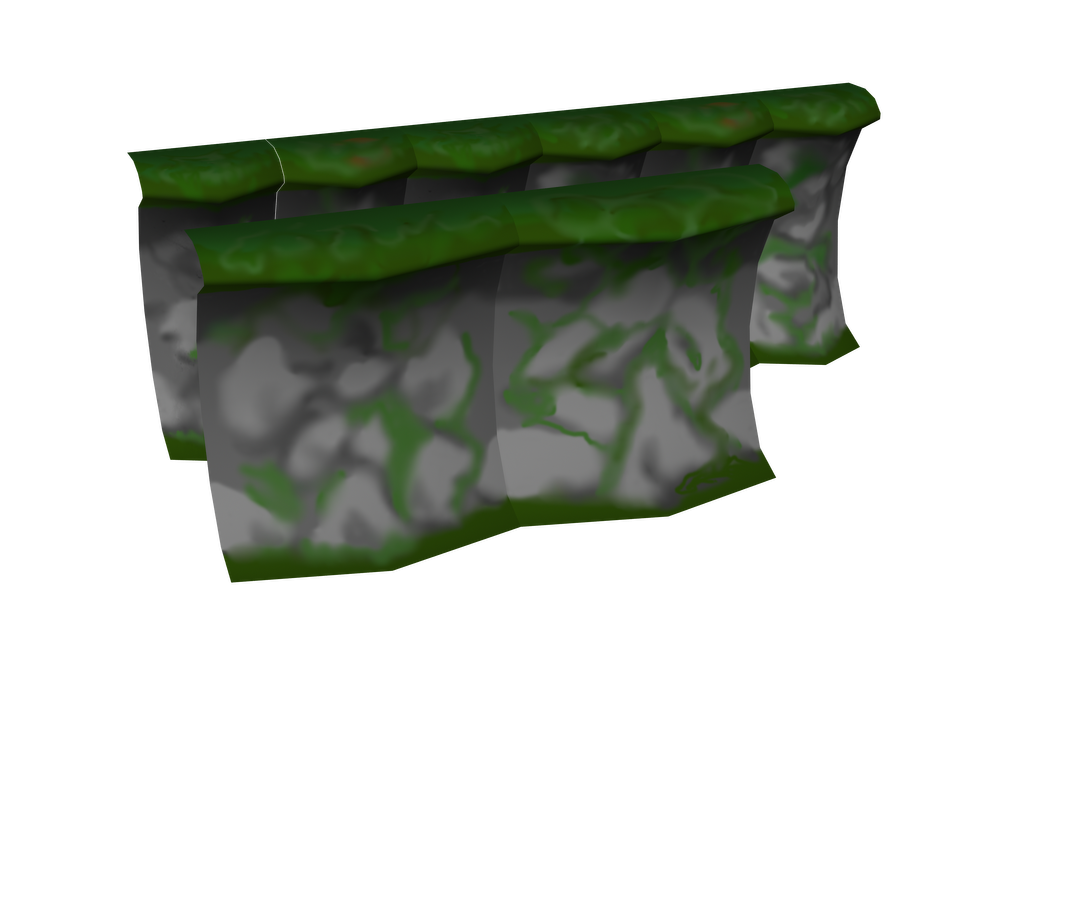 So, my work in re-painting these guys for my RPG game in Smile Game Builder seems to be coming along quite well. Using AssetForge, these little assets allow weeks of modelling to be converted to days.

Awesome man!  I may seek your assistance for textures for future models.  That looks really nice.

of course! I'd be glad to help!

These models work great with Godot, thanks a lot!

Here is a screenshot of programmatically created buildings in Godot 3.1.1. Still lots to do (missing props, accents...) but it's coming along nicely. 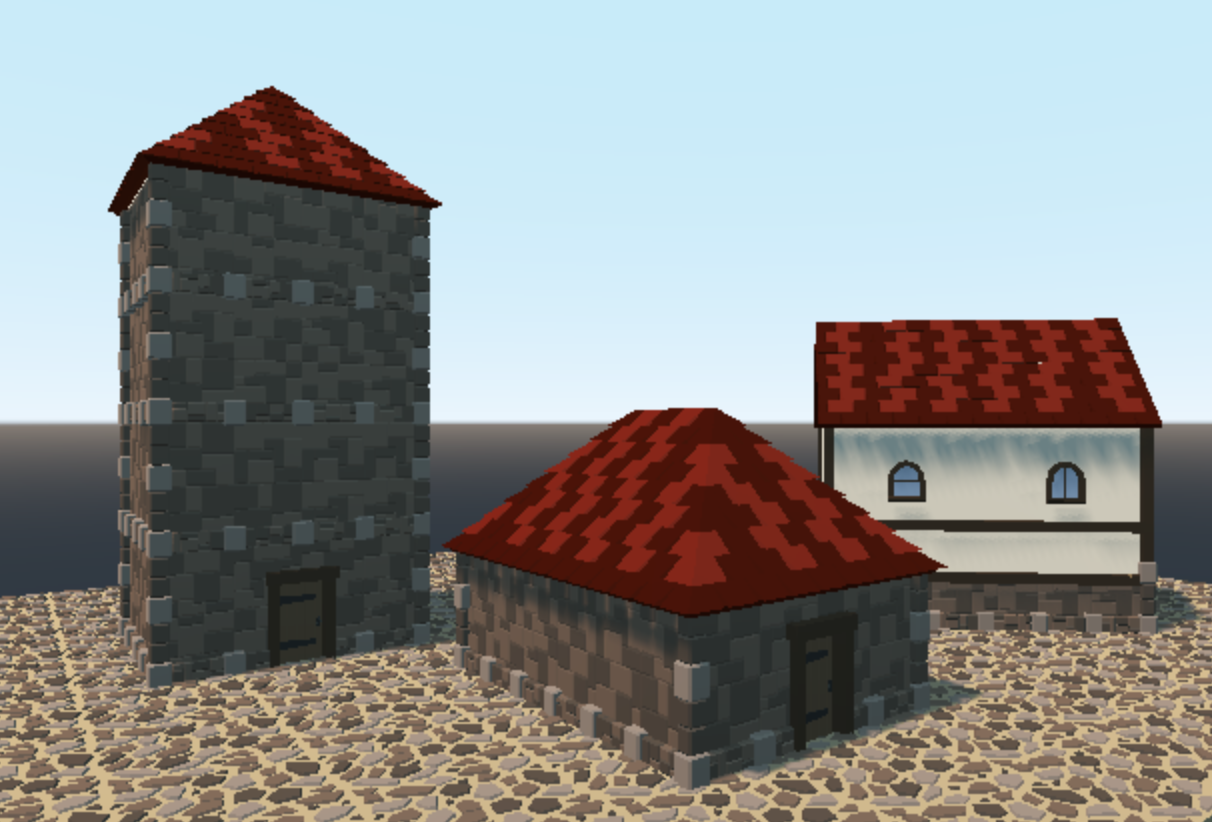 Lol nice!  I laugh because I never thought of programmatically creating full structures in code.

I was wondering if you are planning make it where it have textures(lowpoly) in the inside. All modulars are just one sided. For example: the panels on the doors are just on one side, so making a indoor looks all flat. Thanks.

This was only meant to be external.  I should make a medieval interior pack.  You'd have to implement a screen fade when entering buildings though.

Textures are down the road.  Partial waiting for Assetforge to support custom textures.

...or I could just reuse all the wall models and pretend I made new one =)  I would make props for the rooms of course

I think I may have misunderstood the original request, not to reveal a model that's onesided, but to have decorations for the internal of a model..

But, to answer. What I really like is that Keith already took care of that with all sorts of little wooden beams and such for his Modular village, so that an AssetForger (yes, I'm coining that as a term now) could easily add baseboards, half wall panels even articulate walls inside. He can even use some of those panels for other things like wall bookshelves and more. Scaling, rotating and moving the various blocks to fit certain ideas can really make the blocks sizzle, without a huge Poly boost. 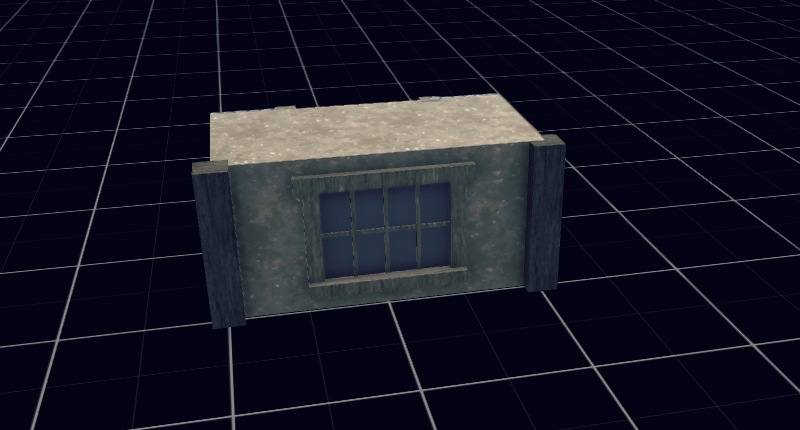 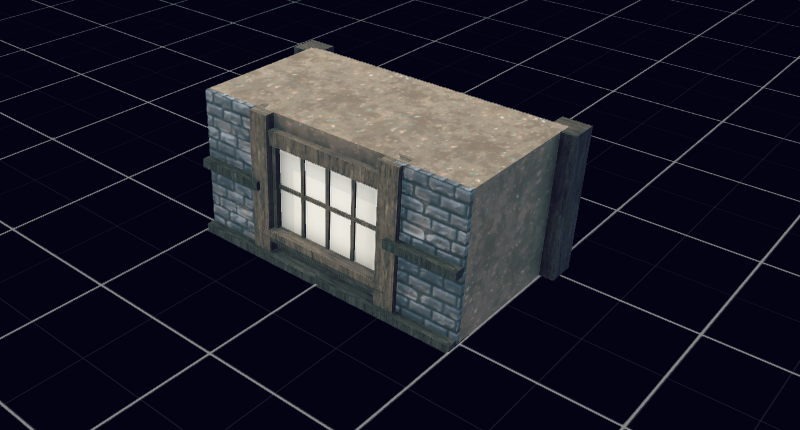 (Yes, I just replied to myself)

This was created with the same external pieces. + 1 flower from the Terrains and Hills pack. 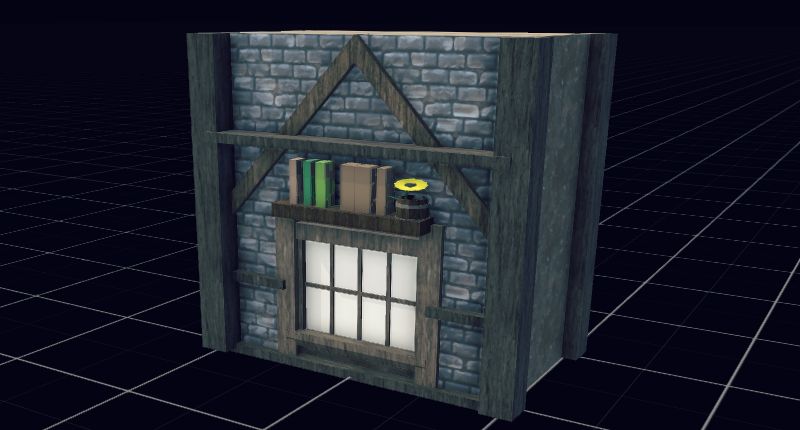 I just replied to your reply.  I plan on making specific tavern props and other things like this.

Hello,  just a question, when importing this assets in Unreal, the materials seems  brighter than in the pictures, is this normal or is there a configuration I'm missing? (this also happens in the Modular temple and in the Modular Terrain for me)

I checked  the .mtl file and the Kd matches with the RGB in the Unreal Materials

here's a picture for comparison 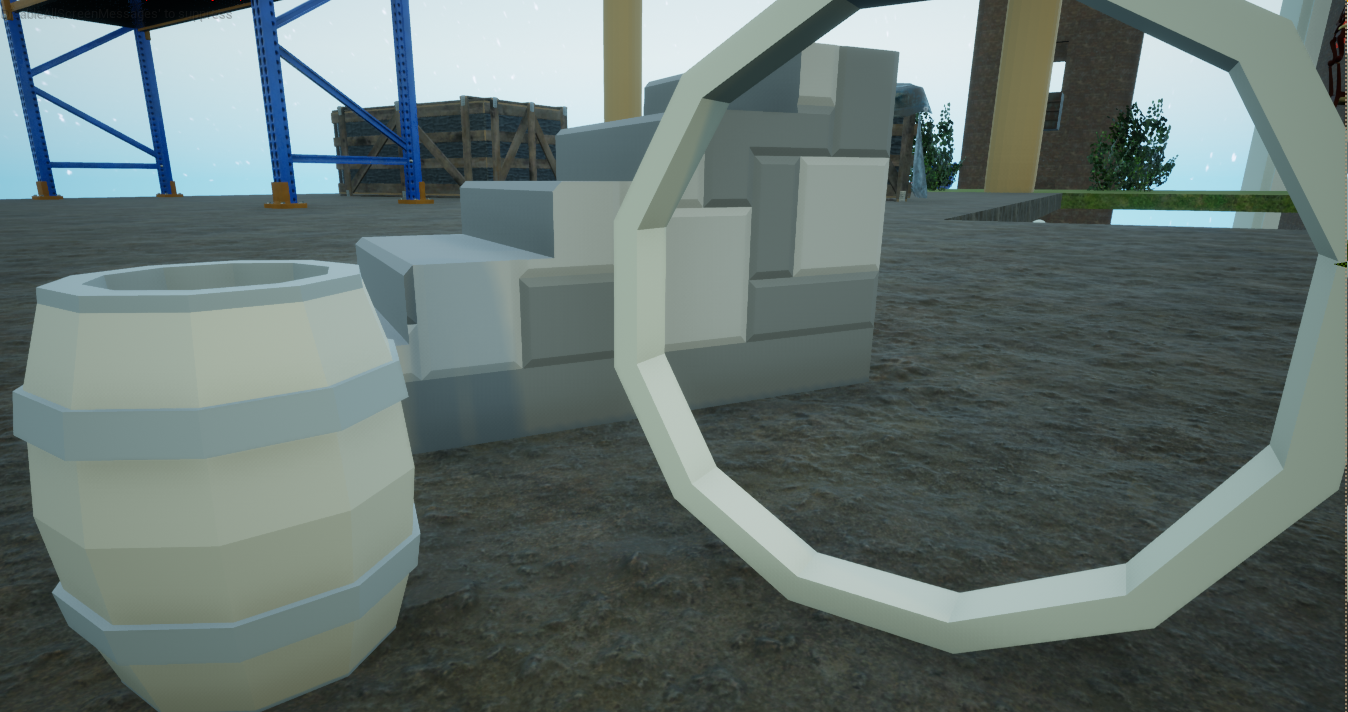 I only use Unity and I have no issues.  I may test in unreal later.  I assume unreal doesn't like wavefront files.

This set is simply amazing. I find myself working on my third house already!

Do these assets come with the textures like in the pictures?

there are no textures in the pictures even.  Pure flat lowpoly shading.

ok, I see. So if we download these and import them into a game engine like Unity they will come in grey? We have to apply the color to the material? Sorry for all the questions, just want to make sure before downloading.

They use a MTL file defining the colors.  In truth, you really do need something like Assetforge to put things together.  Consider this more like a building block set.

Ok, thank you for this explanation! I really appreciate it.

When I attempt to use these assets in Unreal Engine 4 they appear very small in the menu, and when I spawn them in I have to drag them out for about 30 seconds before they are even some what useable, please help

I already answered this question from you in the comments of the Modular Terrain Pack.  You have to scale them up 100 times when using them in unreal.

The models are based on the cm scale, not the m scale. They work fine for other engines like Neoaxis and Platinum Arts Sandbox, and other 3d engines that use the cm scale.

This is really awesome..I plan to use this to remake a whole village. Is there a way I can talk to you on discord etc?

I'm stilll trying to decide which discord server to join first.  Been invited to a few after I released this pack.

I ended up joining Pixeland and itchio.  My tag is Keith@FSP

Hi, how is your project re-building RuneScape going? I'm actually working on a RuneScape related project for myself combined with these blocks, ThreeJS and RS3 models without textures (low quality). It's basically a low poly RuneScape spin-off. Started by me and my friend for fun and learning. Are you perhaps interested in sharing your work or working together on a project? Let me know if you're still actively in Assetforge. Thanks!

Awesome! Thank you very much. When I start making some money with my stuff I'll start by sending you some for your hard work. With that in mind do you think you could help me with a model or two? And I was wondering if by chance you would make a sci fi city set?

I was planning on sci-fi next actually.  I still have more pieces to add to this pack first, though.  If there are some pieces you think would go well with any of the packs, let me know.

Well I can think of plenty of models to make or sets. One would be a Mountain Valley with mountains and rocks and some stuff for a lake such as a boat and stuff that would go with camping. And that would also allow you to make caves and such or plan your map if you want to say map a world.  Another one would be a side scrolling set which I don't think I've seen.  Alien landscape set,  Alien city set, Planet set, Gun set, underground base set, city set, crystal set, superhero set, grave set, Sci-fI building interior set, Egyptian tomb set, Egyptian set, Space Dock set, Interior space ship set. I have lots more ideas but that would have to come at a later time or something I might try myself.  You most likely won't have time to do all of this.

I am considering doing more natural hills and mountains.  I already have stalactites and such that haven't been released.  Also, the beach expansion showed me that these can overlap nicely so I will use that technique more.

Lol sorry to lay that all on you but just had some ideas and wanted to get them out.

don't sorry about it.  It's good to be excited about creating games.

i would love to help out with that too, if you need any geoformed variations of a set block, let me know...

Great Models, What did you use for making them? 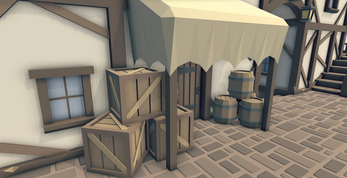 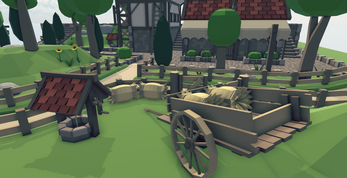 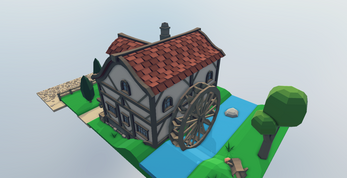 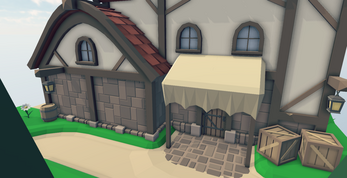 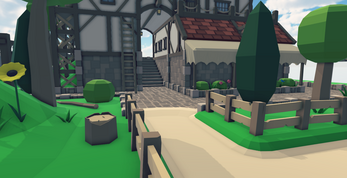 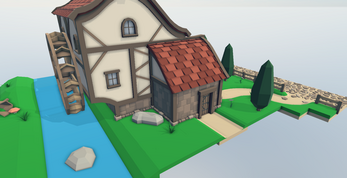 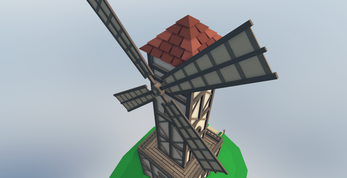 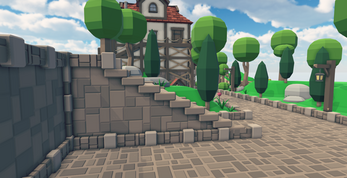 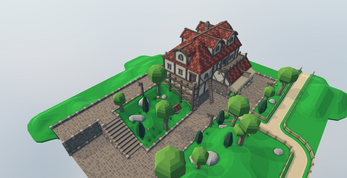 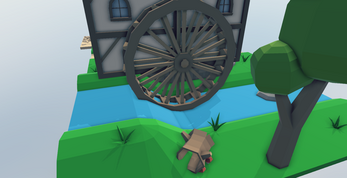 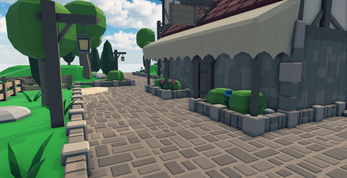 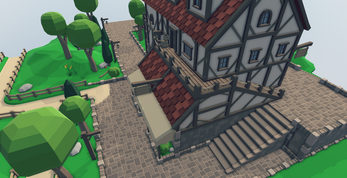 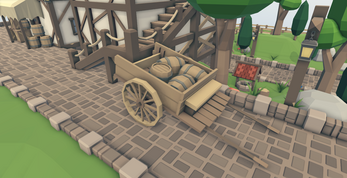 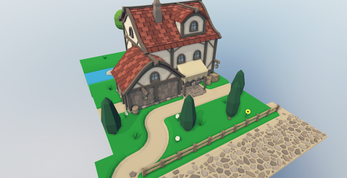 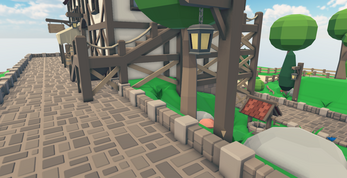 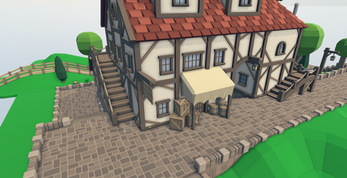